Editorial: Why do we keep building on wetlands?

Why do we keep building on wetlands?

By The Editorial Board 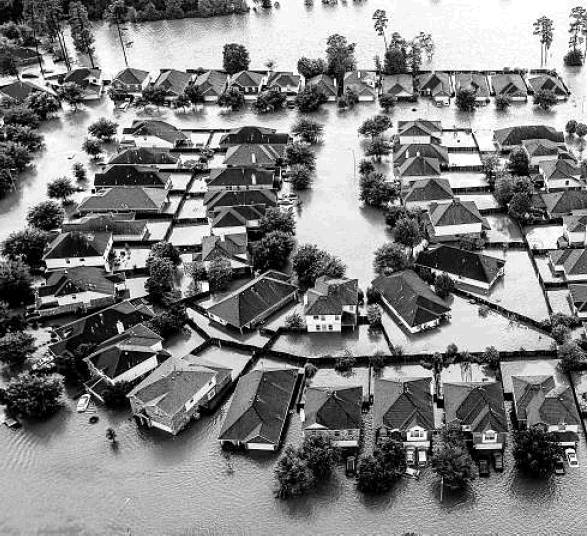 Brett Coomer / Staff file photo A neighborhood in Spring is inundated by flooding from Hurricane Harvey in August 2017. How much development is too much? Nature has drawn us a map.

If we’re honest with ourselves, we all know why a few days of heavy rain in Houston renders whole city blocks impassable, turns front lawns into freshwater ponds and decades of household memories into piles of bulk trash on the curb. It isn’t just that Houston — and much of the Gulf Coast — was built on a swamp. It’s that we destroyed, and then proceeded to build on top of, the very wetlands that could have prevented much of the flooding by doing what nature designed them to do: absorb the water like a sponge, then slowly release it into watershed drainage systems.

What’s worse, we never stopped building in wetlands and flood plains — no matter how many Harveys have punished us for it. And now, weakened federal regulations left over from the Trump administration are making it even easier to get risky developments approved.

Take Hitchcock, a tiny city of not quite 8,000 in southern Galveston County. It was devastated by Harvey, which damaged around 70 percent of homes, several historic buildings and left City Hall marinating in a foot of water.

Situated on the coast, a mere 16 feet above sea level, much of Hitchcock resides within a flood plain, and a third of it, about 16,000 acres, is considered wetlands.

That hasn’t deterred development in a 33-acre plot of dense forest and wetlands at the intersection of Texas 6 and FM 2004 that has become a tension point between preservation and growth. The skeletons of three- to four-bedroom houses rise on the construction site of what is to be The Oaks. The $25 million, 90-unit multifamily subdivision is marketed toward middle-income Texans in an area that desperately needs affordable housing. On its face, The Oaks will help boost a dwindling tax base in a city that only a couple of years ago was flirting with bankruptcy. Once fully occupied, city officials expect the development to bring an estimated $600,000 a year in property taxes.

Under the surface, though, The Oaks is a poster child for shortsighted development and counterproductive government spending. Not only is The Oaks being built in a 100-year flood plain, it’s being subsidized by federal Harvey disaster aid.

Yes. The government, meaning you, the taxpayer, is paying a developer to put more people in harm’s way — using funds intended to dig them out of the last storm.

How can this happen? Easily and quite legally, apparently. The Texas General Land Office, the gatekeeper for federal disaster aid that Texas needs far too often, decided to dip into one of the pots of money it received after Harvey to help fund The Oaks development through its Affordable Rental Program. In 2019, the Land Office earmarked $17 million for the project — more than two-thirds of its cost — to Galveston-based developers DSW Homes.

While the arrangement certainly seems to defeat the purpose of recovery funding, it appears all parties followed the letter of the law. According to the U.S. Department of Housing and Urban Development, which allocated the federal funds, a housing development can rise above flood plain restrictions if it is built two feet higher than base flood levels.. The nine-foot pilings and ground-floor garages planned at The Oaks meet that standard.

And what about the wetlands on the site?

Bayou City Waterkeeper, a nonprofit focused on wetland protection and Clean Water Act compliance, sent a letter in September to the Army Corps of Engineers raising concerns that an environmental consultant used by the Land Office and the developer underestimated the number and acreage of wetlands affected by the development. The nonprofit conducted an independent review of the site and found several likely wetland areas not taken into account — as many as eight total acres, about 14 times the 0.57 acres found by the other consultant.

What accounts for the discrepancy? Under the Trump administration, the Environmental Protection Agency redefined which wetlands are protected under the Clean Water Act to waters that are directly or indirectly connected to a “perennial tributary” — a river, bayou, stream or creek. And that’s the narrow definition of wetland used by the consultant for the Land Office and developer, and also, by the Corps in its own assessment.

Wetlands experts such as John Jacob agree. Jacob, a retired Texas A&M University professor who studies Texas wetlands, conducted the independent assessment of The Oaks site for Bayou City Waterkeeper. Based on the presence of absorbent soils, commonly occurring wetland trees (Chinese tallow, hack-berry, elms) and wetland hydrology at the site, Jacob used the scientific definition to determine there were more than eight acres of wetlands on the site, not the minuscule amount found by the Corps and the other consultant.

“That was kind of shocking to me that the Corps was not really pressing the (wetlands) issue there,” Jacob told the editorial board this week. “There were clear, clear patterns.”

Bayou City Waterkeeper asked the Corps in October 2020 to reexamine the areas in question and asked the developers to cease construction until an investigation could be completed. More than nine months later, construction continues and the Corps, in a statement to the editorial board this week, confirmed the status of its investigation: The Corps determined the wetlands in question are not within the agency’s jurisdiction.

Michael Regan, the EPA administrator in the Biden administration, committed this month to undoing the Trump-era rule, and we urge him to act swiftly in doing so.

The Oaks development clearly demonstrates what’s at stake. Most likely, though, any federal rule change will come too late to stop it. The families who move in, even from their elevated perches, will be on the front lines of the next storm that churns up the Gulf, and the whole area could suffer more flooding and damage after more precious wetland defenses are whittled away.

Yes, in the short term the development will also bring much-needed tax revenue. But how long until the benefits are eroded by the harm?

As so many of our leaders claim to embrace a vision of a flood-resilient region, it makes no sense to pave over the fragile natural defenses we have left. The consequences of rampant growth are largely borne by citizens who live downstream, and after emergency crews come to bail them out, taxpayers will once again be left footing the bill.

The wetlands dispute in Hitchcock underscores the same debate that has raged in Houston for decades. We keep asking: How much development is too much? But that’s the easy question. Nature has drawn us a map. The hard part is following it.